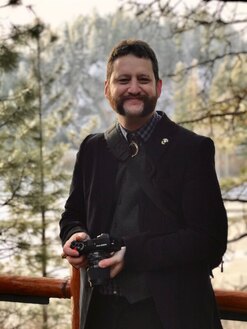 Terrance "Terry" Kalama Hoeft, was born in the Pacific Northwest and raised on his family homestead farm. His family had settled in the are since the 1860's developing the land and many attended Hillside Bible Church of Forest Grove, OR which can count over 5 generation that have attended. After graduating High School Terry enlisted in the United States Marine Corps where he served 5 years and 2 tours of Iraq in support of Operation Iraqi Freedom. Completing his active service in 2010 Terry left the Marine Corps as a Sergeant to pursue his round about course to Ministry.
Terry attended George Fox University graduating with a Bachelors of Arts in Biblical Studies and also attended George Fox Evangelical Seminary (now the Portland Seminary) for a time. Completed the Village Missions Candidate School, and an extended internship with Village Missions under Pastor Tony Pinkham as Kettle Falls Community Church.
Terry now serves as the Pastor at Sumner Community Church outside of Coos Bay, Oregon.
How Can I Support Terry?

Yes, Kana Kahuhipa, Hawaiian for "His Shepherd". We are each called by God to our own appointed Ministry, in that we can take pride in doing the work which has been specifically set out before us. Mine happens to be in Preaching and Teaching, and while I might consider myself a Shepherd of sorts I am subordinate to the Good Shepherd as described in John 10. It is a reminder that we are first and foremost His Servants whatever the Mission or Occupation.

Village Missions exists to develop spiritually vital churches in rural North America. With almost 27 Churches closing per day in America, Village Missions exists to revitalize the communities centered around the country churches of rural North America. This often overlooked field still needs the Gospel as much as any other and for this aim Village Missions places qualified Missionaries into full time ministry to feed the spiritual needs of the community or as their often repeated saying. Preach The Word, Love The People.

Click Here to learn more about Village Missions.
Powered by